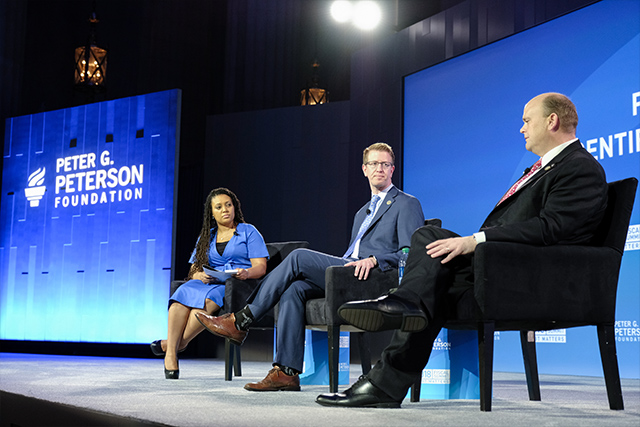 The day's first panel brought together two leaders from the Problem Solvers Caucus — a unique, bipartisan group in the U.S. House of Representatives that seeks areas of common ground.

Representative Tom Reed (R-NY) and Representative Derek Kilmer (D-WA) joined Marketplace Senior Reporter Kimberly Adams, the moderator, to discuss the political challenges in reaching across the aisle as well as the opportunity that exists for collaboration and compromise to make progress in critical policy areas.

Both policymakers touted the potential benefits of the parties coming together to talk about a middle way forward. Reed said, “I’m a proud conservative Republican, I know Derek is a proud Democrat, and we bring that to the table. But what we do not do in that conversation is allow that to block us from getting to the common ground.”

Kilmer added, “It’s important for Democrats and Republicans to actually talk with each other. It shouldn’t be newsworthy when Democratic leadership and Republican leadership meet … that should be something that is happening consistently.”

To secure our nation’s future, “we must address this before it’s too late,” Peterson said. In just over 10 years, interest costs will become the third-largest federal program, and in just over two years, “we’ll spend more on interest than we do on our kids.”

Highlighting “extremism on the left and the right” as a barrier to bipartisanship that produces good policy, Reed said that “we have to, as a country, say, ‘You know what? We’re in this together.’ And we’ve got to take on that extremism.”

Kilmer argued for a reformed budget process to help improve fiscal sustainability. “Broken process leads to broken outcomes,” he said, pointing to a lack of transparency and to limited time to assess or have input on legislation. Lawmakers, he said, are often forced to choose between “a clearly flawed spending bill or a government shutdown. Both are bad options.”

Adams asked how much of a priority voters place on fiscal issues. Kilmer said, “It doesn’t come up enough, given how big an issue it is,” adding, “the reality is that debt’s a problem … it’s a drag on our economic growth.” Reed pointed out the importance of putting the national debt into easily relatable terms. He noted optimistically that every group he talks with — no matter their political leaning — comes to see the value of compromise, “so long as it’s an honest deal and it actually solves the problem. It is amazing when you talk to the American people and you have a conversation with them, how powerful they are when they unite and they get information.”

Kilmer argued that at times “the fiscal debate isn’t focused on the right areas.” He said that mandatory spending and tax expenditures should be the subject of “robust debate,” but instead, discretionary spending often takes center stage in fiscal discussions. “And the challenge with that,” he said, is that “you end up squeezing some of the things that, one, are not the main driver and, two, contribute to economic growth over the long haul.”

Both lawmakers agreed that the problem is not a lack of policy options, with Reed noting that “All the experts know what the solutions are. … It’s some sort of balancing revenue with spending reforms.” He predicted that if a “grand bargain” comprehensive fiscal reform package were brought up for a vote, there would be sufficient support in the House and Senate.

Kilmer agreed that there is a middle path forward, saying “the far right of the Republican party and the far left of the Democratic party are likely going to be frustrated with any grand bargain. That lends itself to Democrats and Republicans holding hands and doing this together. It’s the only way for this to happen.”

Referring to his support of a comprehensive fiscal reform package that was a bipartisan compromise in the mold of Simpson-Bowles, Reed said, “I will tell you, it was the best vote I ever took.”