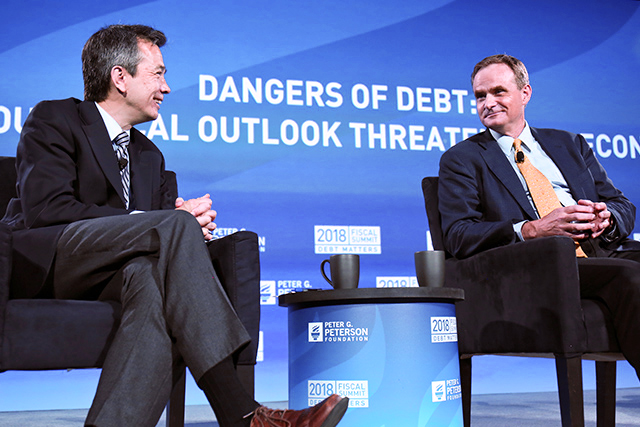 Dangers of Debt: How Our Fiscal Outlook Threatens The Economy

Wall Street Journal Chief Economics Commentator Greg Ip moderated the day’s next panel, which brought together voices from the private sector and academia to analyze the risk that high and rising debt poses to our economic future.

The wide-ranging conversation focused on the key drivers of our unsustainable ﬁscal outlook, the potential for interest costs to crowd out other budget priorities and aﬀect private sector growth, and what it will take for a political solution to the debt crisis.

Steve Rattner, Chairman and CEO of Willett Advisors, called our ﬁscal situation “more dangerous than usual,” citing trillion-dollar deﬁcits “as far as the eye can see.” Rattner said he is concerned not only about a market reaction and a credit crisis, but also about the possibility that markets won’t react and that debt — and the risk — will continue to rise unabated.

Deanna Mulligan, President and Chief Executive Oﬃcer, The Guardian Life Insurance Company of America, shared her concerns about inaction causing “a lot of pressure [to] build up for the long term.” She argued that rising interest costs will begin to affect priorities within the federal budget. “One thing we have to think about,” she said, “is how we are spending our money as a country. And as the deﬁcit rises, we’re spending more and more on the interest rate payments we have to make to support it. And as a business person, I worry that that spending is crowding out productive government spending.”

To secure our nation’s future, “we must address this before it’s too late,” Peterson said. In just over 10 years, interest costs will become the third-largest federal program, and in just over two years, “we’ll spend more on interest than we do on our kids.”

Simon Johnson, the Ronald A. Kurtz (1954) Professor of Entrepreneurship, MIT Sloan School of Management, said that while America has “extremely good fundamentals,” our unresolved debt problem is “a sword hanging over the recovery.” If we don’t stabilize our ﬁscal outlook over the long term, he argued, we risk “hand[ing] our fate [to] global capital markets and to the appetite of other countries for our government debt.”

All three panelists noted that with recent tax and spending legislation, the United States is building up its debt load at a time when the economy is growing. Johnson cautioned against this pro-cyclical ﬁs-cal policy, which is out of step with the rest of the world. “We have a low rate of unemployment. There are very few people who are arguing we should be expanding ﬁscally at this point in time,” he said, adding “we’re having a ﬁscal expansion when al-most all other industrial countries are actually on a path to reducing their debt-to-GDP [ratio], [and] we’re increasing our debt-to-GDP [ratio].”

While panelists agreed that a lower corporate rate as part of the December 2017 tax legislation will bolster American competitiveness, they were concerned about the bill’s overall impact on the debt. Johnson argued that the bill didn’t constitute real “reform,” saying, “I think what we got was a tax cut and larger deﬁcits.”

Mulligan oﬀered a historical perspective, observing that “if you look back to the times when this country has run big deﬁcits in the past, and we have [in] times of war, times of recession, depression, we’ve typically paid that deﬁcit back down within 10 years.” Today, she said, it’s more diﬃcult “for the American people to understand why we’re in the deﬁcit position we’re in.”

Rattner noted the “intergenerational aspect” of our ﬁscal condition, stressing the unfairness of “creating an enormous debt burden that is going to end up limiting what our children are able to do and what our government is able to do for our children.”

Referring to his support of a comprehensive fiscal reform package that was a bipartisan compromise in the mold of Simpson-Bowles, Reed said, “I will tell you, it was the best vote I ever took.”

Johnson lamented the recent deﬁcit spending: “Five years ago … or even two years ago, even a year ago, we could have put ourselves on a diﬀerent ﬁscal path. And I think that’s why this year is worrying … because we have clearly and resolutely stepped down a diﬃcult path that is just going to make all of these future problems that we agree on much harder to deal with.”

When it comes to moving the issue of ﬁscal responsibility ahead in Washington, Mulligan urged that as citizens we must provide more support to representatives in Congress and let them know, “This is a priority for us, and we’re going to stand with you, even if you have to do some things that are a little unpopular, because it’s more important to come to agreement about what we’re going to do about the debt.”