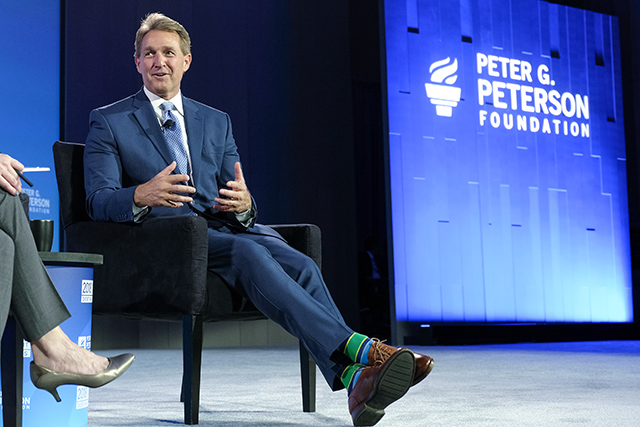 WERNER opened the session by asking Flake whether he was optimistic that policymakers would be able to address America’s unsustainable fiscal outlook. To move forward, the senator said, we need to get beyond the “tribalism problem” that’s prevented progress on major issues like the debt. “You have to have both parties willing to engage and share the risk — the political risk — to hold hands and jump together,” Flake said.

Interest rates, he said, are “artificially low” right now, so the American public isn’t fully experiencing the pain that a debt crisis could cause — but that could change quickly. He warned that “if interest rates go to where they’ve traditionally been … then the debt service will start crowding out other discretionary programs; then it’ll really start to pinch.”

Flake called for voters to become more vocal on ﬁscal matters to ensure that the debt becomes a meaningful campaign issue and to provide the “motivation” for elected leaders to tackle what is a complex and politically diﬃcult policy problem. “If your constituents aren’t pushing you to do this,” he said, “then there’s simply no upside to doing so.”

Speaking about the recent tax legislation, Flake said he strongly agreed with the changes to the corporate tax rate, but had misgivings about the individual rate cuts and would not vote to extend them permanently.”

Looking back at his career, the retiring senator highlighted his long-standing focus on discretionary spending, but said there’s more work to be done on the ﬁscal front. “We haven’t been able to get to mandatory spending, where the real drivers of our debt are coming from,” he said.

In this conversation, Pelosi outlined her commitment to a “pay-as-you-go” philosophy to ﬁscal policy. “Whatever you want to invest in, you must oﬀset or pay for,” she said.

Asked about the recent tax legislation, Pelosi argued strongly that the bill was not properly targeted at the middle class, and was too damaging to our ﬁscal outlook. She expressed her desire to revisit the bill in future Congresses, with a goal of working “in a bipartisan way with transparency” on new tax legislation “that promotes growth, generates good-paying jobs, and reduces the deﬁcit.”

Asked about making middle-class tax cuts permanent, Pelosi said she would consider doing so as part of a broad, ﬁscally responsible policy that is targeted at growth.

Pelosi talked about the importance of targeted public investments that result in economic growth and increased revenue back to the government, highlighting both education and infrastructure. “But again,” she cautioned, “we have to take it to a place that reduces the deﬁcit.”

The Leader expressed concern about rising deﬁcits in a time of a growing economy, arguing that “it’s the ﬁrst time we’ve had a low un-employment rate and such a big deﬁcit, because if you’re having low unemployment, you might have some reduction and support services and the rest, you might have more revenue coming in, but something’s wrong with this picture.”

Pelosi argued that the national debt becomes personal for American voters if it leads to cuts in programs they care about like Social Security, Medicaid, and Medicare, saying, “when it hits home is when you will see the response to it.” Looking to the next generation, Pelosi referred to her grandchildren, who will inherit the policy decisions made today, calling the debt “a dark cloud” on our future.

Senator David Perdue advocated a comprehensive approach to solving our nation’s growing debt problem. “We can’t grow our way out of it. You can’t cut your way out of it. And you can’t tax your way out of it,” he said. “We’re going to have to ﬁnd a combination of things that, over a period of time, some 20 or 30 years, we can get this debt back to some reasonable level.”

Continued government borrowing, Perdue said, “camouﬂages the real crisis” of rising debt, and growing interest costs are a key reason to act now. “This year we’ll spend $50 billion more on interest alone than we spent last year,” he said. “We’ll spend more on interest in 2023 than we will on all of our military spending. Pretty soon, we’ll be borrowing money to pay the interest on past debt. And that’s the sign of a bankruptcy if I ever saw one.”

He highlighted the Joint Select Committee on Budget and Appropriations Process Reform, on which he serves, as a possible vehicle to create the conditions for legislators to make more ﬁscally responsible decisions. The budget process, he said, is “so broken,” but he holds out hope that a “clean page approach” can increase transparency and stability in budgeting.

Perdue called Congress’s frequent inability to pass a budget on time “irresponsible” because of the uncertainty it causes. He cited potential damage not only to the economy overall but also to priorities like military readiness, saying that that lawmakers should be “all hands on deck” to avoid another potential government shutdown — and the last minute budgeting that goes with it — at the end of the ﬁscal year. Perdue called on lawmakers from both sides of the aisle to take the issue head on, noting that for too many, “self-interest outweighs the national interest.”