The Tax Policy Center (TPC) released a new analysis this week illuminating the tradeoffs and opportunities faced by policymakers as they explore tax reform. TPC’s analysis, which was supported by the Peter G. Peterson Foundation, makes clear that there are many good options available to lawmakers to achieve fiscally responsible, fair tax reform.

The paper puts real numbers behind different scenarios for a structure for tax reform: eliminating income tax expenditures to enable lower tax rates. Importantly, the analysis outlines scenarios that are both fiscally responsible and distributionally neutral.

Key finding: The analysis finds that eliminating virtually all tax expenditures allows for individual and corporate rates to be lowered significantly. Such an approach could also preserve the amount of revenue projected under current law and maintain the distribution of tax burden across income groups.

Under TPC’s analysis, rates could be significantly lowered from their current levels, as set forth in the table below: 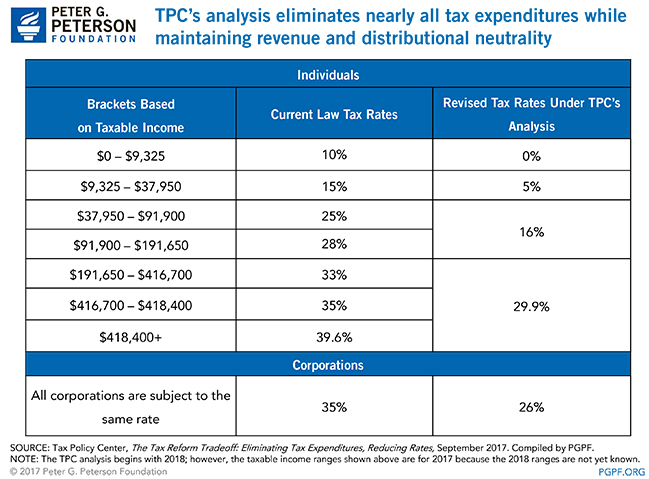 The TPC scenario above eliminates all but three individual tax expenditures, which benefit lower-income Americans: the child tax credit, the earned income tax credit, and the partial exclusion of Social Security benefits. Those expenditures were retained so that overall reform would remain distributionally neutral.

The TPC scenario maintains a level of revenues over the next two decades that is substantially similar to the level projected under current law. Ideally, tax reform would improve our fiscal outlook, given that our debt is set to grow significantly for many years to come. At a minimum, lawmakers should pursue policies that don’t increase federal deficits or debt. The TPC project illuminates the choices available to policymakers and demonstrates clearly that fiscally responsible tax reform is achievable.

Read the second installment in this series

If lawmakers can’t find a way to pay for tax cuts, future generations will be stuck with the bill. Tax reform should grow the economy, not the debt.

Quiz: How Much Do You Know about the U.S. Tax System?
Who Pays Taxes

The Tax Reform Tradeoff: The Cost of Keeping Expenditures
Issues in Brief: The Debate Over Tax Expenditures
Analysis of Chairman Ryan’s 2013 Budget Proposal