The Financial Condition of Medicare 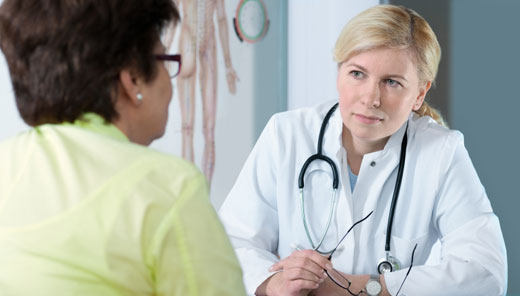 Social Security Act of 1965, Medicare provides health insurance benefits to 38.7 million people over age 65 and 7.6 million people with disabilities. The original Medicare program offered a free hospital insurance benefit called Part A, and supplemental coverage that people over 65 could buy into for a monthly premium called Part B. Since that time, Part D has been added to provide prescription drug coverage for a monthly premium. The Medicare program spent $509 billion in 2009: payroll taxes totaled $191 billion; $65 billion was paid for by beneficiary premiums, transfers from state governments provided $7.6 billion, and the rest was financed by general federal revenues.

The retirement of the baby boom generation and lengthening lifespans will affect Medicare in the same way that they will affect Social Security: they will lead to a rapid increase in beneficiaries. Compounding that, is the fact that overall health care costs, which have grown much faster than inflation, are projected to continue rising at a rapid pace. Those two factors combined are projected to drive Medicare costs up very quickly in the next twenty years. According to the Trustees report, the program will grow much faster than the economy or federal tax revenues under current law, making it the primary cause of the projected explosion in federal deficits in the coming decades.

In order to pass health care reform that would not increase projected deficits over time, legislators included provisions in the bill that would result in substantial cuts to future Medicare spending. Accordingly, the new Medicare Trustees report shows that the ACA, if fully implemented as designed, will dramatically improve Medicare’s long-term financial outlook. The new law requires the Medicare payment rates to grow much slower than previous laws have allowed or previous projections have assumed (see Figure 1). In addition, it eliminates some inefficiencies in the Medicare Advantage program and reduces the costs of the Medicare program over time. ACA imposes an extra Medicare tax of 0.9 percent of wage income on individuals earning over $200,000 and couples earning over $250,000.

If all changes in the law are implemented as scheduled and left unchanged, the Medicare actuaries estimate that the ACA would lower total Medicare spending by 1.3 percent of GDP in 2030 and 2.2 percent in GDP in 2040. (See Figure 2 for a comparison of the 2009 and 2010 projections.) However, a substantial amount of these savings are used to finance the cost of expanding access to health insurance to 30 million Americans, which are not reflected in the Trustees report. Furthermore, the actuaries questions whether all of the projected savings will be realized.

An Unprecedented Qualification to the Actuarial Opinion

The report’s actuarial opinion states that the projections "do not represent a reasonable expectation for actual program operations in either the short range…or the long range." The restrictions on the growth in Medicare payment rates that are prescribed by the ACA will not allow Medicare to keep up with the payment rates of private insurers or the cost of providing medical care to seniors. In addition, the reductions in physician payment rates required by the Sustainable Growth Rate (SGR) formula seem unlikely to be enforced. The SGR would impose cuts in payments of 23 percent on December 1st of this year, and a further 6.5 percent in January 2011. The reason the scheduled reduction in payment rates is so large is that Congress has postponed payment cuts for the past 7 years with a series of one-year fixes. The one-year fixes keep the same long-term spending target while allowing the payment rates to increase temporarily for one more year. Consequently, the discrepancy between the current spending and the SGR target spending level increases each time a new one-year fix is passed, so each year a full implementation of the current law SGR becomes less and less plausible. In all likelihood, Congress will continue to postpone the scheduled payment cuts indefinitely.

Consequently, the Office of the Actuary anticipates that lawmakers will be forced to modify Medicare in the future, allowing a faster growth in payment rates. Othewise, Medicare enrollees will find it increasingly hard to find providers willing to accept their insurance. To reflect this reality, the actuaries provided an alternative projection that assumes that Medicare payment rates return to a more realistic growth rate by 2035. According to that alternative projection, the ACA would lower Medicare spending by less than one-half percent of GDP in 2030 (instead of 1.3 percent) and 0.6 percent of GDP in 2040 (instead of 2.2 percent). (See Figure 2.) 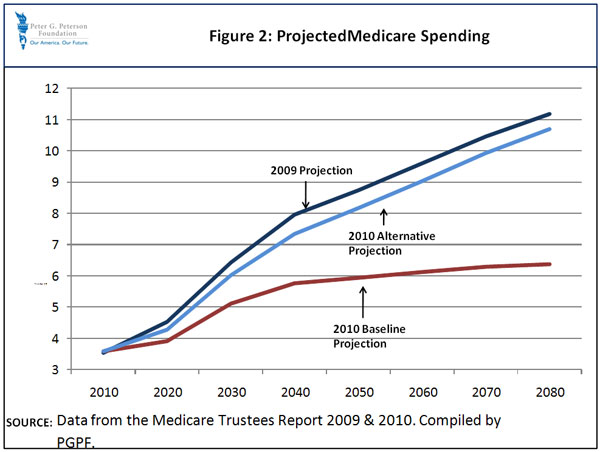 How Medicare Affects the Federal Deficit

Medicare Part B and Part D are voluntary programs. They are financed through the Supplementary Medical Insurance Trust Fund, which has two sources of income: premiums paid by beneficiaries and general revenues from the U.S. Treasury. Premiums cover less than 25 percent of the annual spending for Part B and D beneficiaries, but, by law, the Treasury makes transfers to the SMI Trust Fund to cover the difference, which leaves fewer resources for other programs or contributes to greater debt. In 2000, general revenue transfers to the SMI Trust Fund represented about 5 percent of individual and corporate income tax revenues. In 2010, the Trustees report estimates that the transfer will be almost 19 percent of income tax revenue.

Overall, about 46 percent of Medicare’s financing comes from general revenues (see Figure 3). Another 38 percent comes from payroll taxes. Despite the complex accounting involved with its trust funds, Medicare affects the deficit just like any other government program or tax policy. Revenues that come in through the Medicare payroll tax are included in total federal revenues and reduce the deficit; spending by the Medicare trust funds is included in total federal spending and increases the annual borrowing needs of the Treasury. 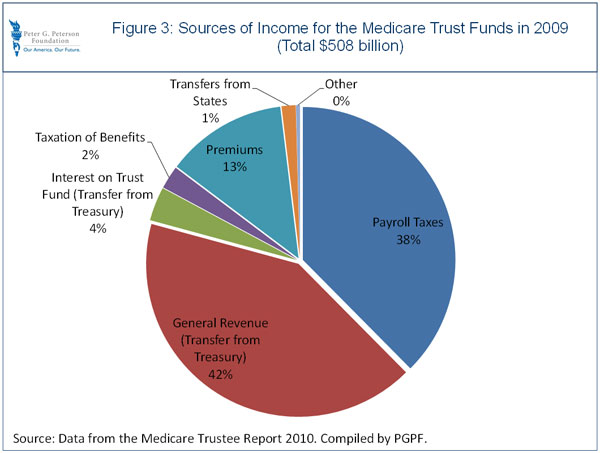 The new Medicare Trustees report reveals that the program continues to present serious fiscal challenges. Ultimately Medicare’s projected financial problems are the financial problems of the entire federal budget and future taxpayers and beneficiaries. Left unchecked, the dramatic growth in Medicare spending will directly lead to higher deficits, spending cuts in other parts of the budget, tax increases, or a combination of all three. Accommodating the huge projected increases in Medicare spending will most likely be a tough process involving difficult trade-offs, but it will be absolutely necessary unless we can successfully reform the program and control health care costs. There is no simple solution to the problem of growing Medicare costs, and there is a lot more work to be done.